How Much More Do MBA Graduates Earn?

What’s the average salary of MBA graduates, and do people really earn more after graduating with an MBA? We look into the real-life economic impact of being an MBA graduate to discover how much more MBA graduates earn.

An analysis of ABS data, published by the ABC in 2019, said people in the highest income bracket in Australia earn over $156,000 before tax annually, or over $3000 per week.

At the time, this top bracket included just 3.8 per cent of all income earners in Australia.

When the analysts looked at that highest-earning group by occupation, they discovered that people in five specific professions made up 29 per cent of that top-earning bracket.

Most of the top earners in this group have at least a bachelor’s degree. However, for an MBA salary, Australia is a top place to be because the highest earners also reflect professions in demand. Just look at distribution managers and the issues with a global shortage of delivery drivers. It’s an excellent example of how professionals with logistics expertise and an MBA need to be able to solve a critical problem, and their skills are in demand across the world. A manager with clinical knowledge is a credible asset when it comes to dealing with complex managerial issues after COVID-19.

This compares with 35 per cent of the adult working population who have at least a bachelor’s degree.

It was a fascinating and revealing view into the earning patterns within the Australian employment market, highlighting specifically the clout of university degrees and the potential earning power of people in business management roles. Three of the top five earning groups relate to business management.

It appears that those with a higher business-related degree, such as MBA graduates, would have an excellent chance of finding themselves in the top 2 to 3 per cent of income earners in Australia, meaning the course should truly pay for itself. It also serves as an excellent launchpad for anyone wanting to develop a career in business administration across a wide range of areas. For those looking at the benefits of an MBA salary, Australia has a lot of opportunities just waiting to be snapped up.

What does the research say though?

Here, we look into the evidence behind the average salary of MBA graduates to figure out exactly how valuable the degree is in terms of dollars. It’s a valuable exercise, particularly when considering whether MBA fees will pay themselves off and, if so, how long that could take. Many candidates hesitate when applying for an MBA because of the cost of fees, which can be prohibitive. We’ve found reasons why that should not discourage you, and in fact, you should follow your dreams and apply.

A deep study known as the 2020 Graduate Outcomes Survey, funded by the Australian Government Department of Education, Skills, and Employment and carried out by the Social Research Centre at the ANU, looked into short-term (four to six months after graduation) and medium-term (three years after graduation) salary outcomes for graduates of higher education institutions.

What does the industry say?

The compensation website PayScale, utilised by more than 8,000 employers to help manage their salary requirements, says the average salary of an MBA graduate, regardless of time since graduation, is A$103,000. The types of jobs that MBA qualifications tend to be required for will attract a range of salary amounts, PayScale says. For example, a CEO will average A$189,700, a project manager will average A$111,000, and an operations manager will average A$105,800.

Other typical MBA-qualified roles and average salaries for the MBA graduates holding those roles include general manager, A$125,900; senior business analyst, A$112,500; and marketing manager,  A$93,100. Importantly, the job satisfaction rating of MBA graduates, the PayScale data says, is four out of five, or ‘highly satisfied’. Emotional health and wellbeing are a priority for managers, so having a job they enjoy enables them to stay emotionally healthy and resilient.

According to PayScale major employers of MBA graduates include

Other options for MBA graduates

It’s not just in Australia that MBA graduates are in demand.

Many of the world’s most successful businesses, including Google, Amazon, PwC, Microsoft, McKinsey, Boston Consulting Group, Facebook and EY, are major employers of MBA qualified graduates.

There’s an emerging market in startups, and an MBA can not only support entrepreneurs but also steer you as a business owner on the correct track.

A global, 2019 study by the Graduate Management Admission Council revealed 62 per cent of businesses that define themselves as startups intend to hire MBA-qualified talent within the next 12 months.

Of course, MBA graduates also launch their own startups, often with astounding success. Some of the best known businesses, including Deliveroo and Atlassian, came from the minds of business entrepreneurs recently graduated from an MBA.

The same report says that in the US, the starting salary for MBA graduates is at a record high – US$115,000 – with 56 per cent of businesses intending to increase starting salaries.

Of course, salary may not be the aim of the game at all for certain MBA candidates.

Many pursue the degree to be the master of their own domain, to launch and run their own business. If that’s the case, then the sky’s the limit in terms of what sort of income or lifestyle graduates might achieve once obtaining the powerful qualification. An MBA will enable them to stay ahead of the game and use their expertise to drive the business forward.

Do employers and recruiters value MBAs?

A prerequisite to any pay increase for an MBA graduate is obtaining a new role in the first place. Fortunately, employers and recruiters alike both agree that an MBA is a valuable asset for future employees.

In a 2020 survey of over 1000 recruiters for top employers carried out by the Association of MBAs and Business Graduates (AMBA & BGA), employers indicated that they still found an MBA to be extremely valuable, despite the fact that the global pandemic had created uncertainty over economic conditions and hiring needs. David Woods-Hale, Director of Marketing and Communications at AMBA & BGA, said that:

“Employers polled in the research are overwhelmingly positive about the value of an MVA from a reputable business school when looking for senior managers … [despite the fact] that they are also worried about the recruitment landscape of tomorrow.”

The survey results showed that a phenomenal 87% of recruiters surveyed said that the organisations they represented were either ‘very favourable’ or ‘fairly favourable’ towards business schools and the valuable skills they imbue in their graduates.

MBA salaries: Before and after graduation

A graduate salary means nothing if it’s not an improvement over what the graduate earned prior to the MBA.

Of course, it would be expected that an employer would pay more for an MBA graduate, compared with the same individual without such a qualification. However, once again, it’s important to look to the data to find out what the evidence says. According to a 2019 study by the Australian Financial Review, MBA graduates can earn significantly more following completion of their qualification.

MBA and EMBA (Execute MBA) graduates can expect the following differentials in their pay after they have completed their MBA:

Following an MBA or an EMBA, many graduates were promoted within their organisation, or were successful in obtaining more senior positions within their industry. However, substantial pay increases were also enjoyed for another reason: many MBA graduates were able to successfully change career after an MBA, which resulted in not only a higher salary, but also a substantial increase in job satisfaction.

One MBA graduate who was able to do this was Tanmay Bhardwaj, who was recently interviewed by Business Because. Tanmay, who migrated to Australia from India, was able to transition from working as an Indian army major, to becoming a consultant at Innovoir. Tanmay believes his MBA helped him learn many technical business terms that he’d never come across before, as well as help him to foster news connections, all of which helped him secure his current role. He says:

“[My MBA was] a great help … Alumni are really keen to refer other MBAs to their company and suggest positions they think are a good fit for you.”

The increased employee value that comes from an MBA, researchers say, is evident on a number of levels. Leadership skills and knowledge are vastly improved, and teamwork and collaboration capabilities and management of related processes are dramatically enhanced. Earning an MBA can also boost strategic thinking skills and knowledge, communication capabilities in a broad array of business environments and, of course, a deep understanding of specific business specialisations such as finance, accounting, marketing, HR, IT and more.

A 2020 survey carried out by the Association of MBAs and Business Graduates (AMBA & BGA) showed that employers thought highly of the skills graduates obtain during an MBA. Specifically, when asked about their abilities post-graduation, employers agreed with the value that an MBA provides: 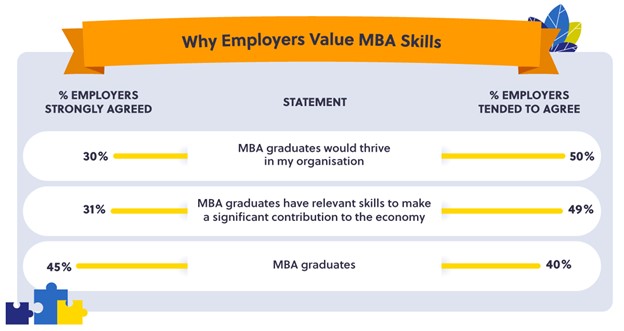 From an employer’s perspective, it’s clear that an MBA is a potent offering that’s clearly worth significantly more in terms of both salary, and the broader contribution of MBA graduates.

Are all industries equal?

Do MBA graduates from all industries experience the same enormous income boost once they’ve  completed their studies, or is the pay rise confined to specific areas of business.

The simple answer is that research has shown impressive salary increases across all industries, but they’re not all equal.

One powerful piece of research conducted by Transparent Career, a U.S.-based compensation and culture platform that specifically targets its studies around what businesses are paying MBA graduates, looked into pre-MBA salaries and post-MBA salaries from individuals who graduated between 2009 and 2018.

“Our data suggests that an MBA degree confers an immediate increase of USD $36,742 in annualized salary—a nearly 50 per cent increase in compensation,” the resulting report said.

As this data is heavily U.S. based, it doesn’t mean quite as much to those considering an Australian MBA. However, great insight can be taken from the industry breakdown.

The five industries in which salaries increased most dramatically by percentage were:

The five industries in which salaries increased most dramatically by dollar were:

Finally, the five industries with the lowest gross salary increases after graduation from an MBA were:

With some of these lower-paying sectors, such as hospitality, faring badly during the global pandemic, their recovery is critical in the next few years. It’s entirely possible that salary scales will change for those graduates able to deliver solutions to industries struggling to recover from the impact of lockdowns.

Based on the numbers, the team at Transparent Career claimed that those attending the topflight MBA schools can likely pay off their course fees within three years if they’re in a top industry, such as finance and consulting—and they only need to use their pay rise to do so. Those in industries that experience lower percentage or gross salary increases will still pay off the course, with their pay rises, within 10 years. Plan ahead and budget, and you could easily pay off that investment that’ll have set your career path on an incredibly exciting journey.

What, then, does the evidence say about salary increases emanating from an MBA? The evidence overwhelmingly shows that salaries are affected, often quite dramatically, in a positive way. While the difference may vary according to industry, most graduates realise a considerable increase in salary within just a few years of graduating from their MBA.

The payback period is typically three to 10 years but, more importantly, the career opportunities that open up to graduates, and the resulting job satisfaction and lifestyle improvements, are immeasurable.

Advance your career with an MBA

If this analysis has persuaded you to apply for an MBA, reach out and start the process today.

Get more information on:

Get more information on: